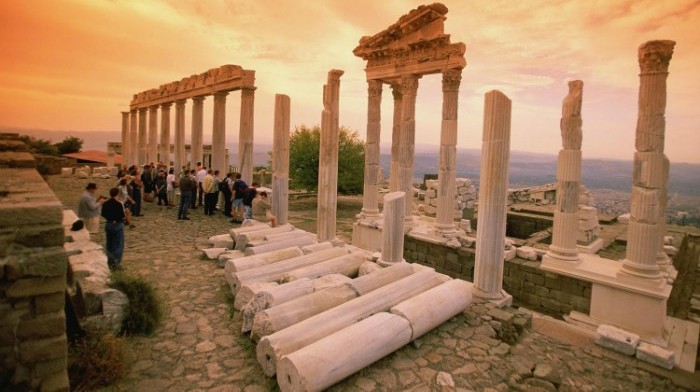 A chance to take two extensive tours at Ephesus and Pergamum ancient sites and a fabolous night in Kusadasi.

Day 1:  We will pick you up from your Hotel or Istanbul airport. You will fly from Istanbul to Izmir about 50 Mins. Our guide will welcome you at Izmir airport. After 45 minutes drive a spectacular day will start for you. For a few hours you will feel like a Roman citizen living in the history of the ancient site of Ephesus. You will have an extensive tour in this ancient site where you will see the Hadrian’s, Trajan’s and the Domitian’s Temples, the huge Roman bath, Harbour Street, the Marble Street, the Gate of Mihridates and Mazues, Commercial Agora, Latrina, the Scolastica Baths, Curetes Street, Polio Fountain, Memnius Monument, the Prytaneion, Odeon, the Satet Agora, the Celcus Library and the biggest amphitheater of Turkey. During the tour you will visit Terrace Houses.
The main goddess of Ephesus was Artemis and the Ephesians dedicated the biggest ancient temple ever built to her. So you will visit the ruins of Artemision which is one of the Seven World Wonders.

Finally after lunch we will drive to the mountain where the House of the Virgin Mary is located in a nature park between Ephesus and Seljuk, which is believed to be the last residence of the Virgin Mary, mother of Jesus. The peaceful site is sacred to both Christians and Muslims, and is visited by many tourists and pilgrims. This House was later visited by Popes Paul VI and John Paul II, who confirmed its appropriateness as a place of pilgrimage. On November 29, 2006, Pope Benedict XVI celebrated mass here. At the end of the tour you will be transferred to your hotel in Kusadasi.

Day 2:  In the morning we will pick you from your hotel in Kusadasi and drive to Pergamon. There you will visit Pergamon's library, The Great Zeus Altar, Trajan's temple, the steepest theatre of the ancient world, King's palaces on the Acropolis. The ancient library of Pergamon is the second best in the ancient Greek civilization. When the Ptolemies stopped exporting papyrus, partly because of competitors and partly because of shortages, the Pergamenes invented a new substance to use in codices, called pergaminus or pergamena (parchment) after the city. This was made of fine calfskin, a predecessor of vellum. The library at Pergamom was believed to contain 200,000 volumes, which Mark Antony later gave to Cleopatra as a wedding present.
You will also see the Red Bazilika, one of the seven churches of Revelation on the footsteps of Saint Paul. After visiting Akropolis, we will drive three kilometers south of the Acropolis, down in the valley, there was the Sanctuary of Asclepius (also known as the Asclepieion), the god of healing. In this place people with health problems could bathe in the water of the sacred spring, and in the patients' dreams Asclepius would appear in a vision to tell them how to cure their illness. Archeology has found lots of gifts and dedications that people would make afterwards, such as small terracotta body parts, no doubt representing what had been healed.After the tour you will have a traditional lunch in a local restaurant and we will drive to Izmir for your flight to Istanbul. Upon your arrival to Istanbul we will transfer you to your hotel.