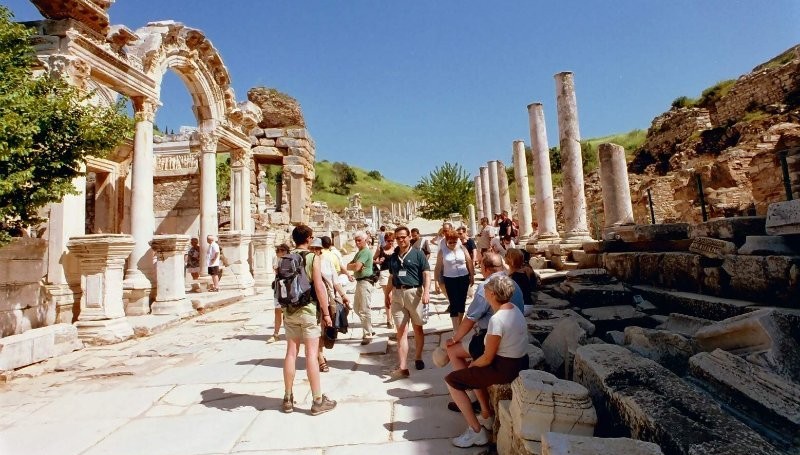 Ephesus Tours from Kusadasi is one of the most popular attractions because the nearest tourist destination to Ephesus is Kusadasi. It is possible to reach the ruins of Ephesus in Selcuk with a comfortable journey of 20 minutes.

Located in the Aegean Sea, Kusadasi is one of the most famous tourist resort towns in Turkey. The nearest tourist destination to Ephesus is Kusadasi. It is possible to reach the ruins of Ephesus in Selcuk with a comfortable journey of 20 minutes. Located in the Aegean sea, it is one of the most famous tourist resort town of Kusadasi in Turkey. Kusadasi is an extremely modern port city with a population of 100 thousand in winter. Cruise port of Kusadasi is wide enough to take 5-6 cruise ships at the same time. At the same time, the largest ships can be anchored in the city center directly because it is deep enough. Ephesus tours start at the port of Kusadasi and the ruins of Ephesus, 20 km away, are easily reached. Kusadasi is located in the Aegean region and can be visited by cruise ships for almost 9 months thanks to its warm weather.

Apart from the Kusadasi cruise port, it has an international modern marina, a harbor for tour boats and a harbor for fishermen. It is a popular tourist city with its many beaches, nice hotels, aqua parks, restaurants and cafes. Other than that, there are extensive shopping facilities and a National Park for nature lovers.  There are other ancient cities besides Ephesus. Priene, Miletus, Didyma, Anaia are just some of them. Kusadasi is also just one hour drive from Izmir airport.

Ephesus Tours from Kusadasi include also important places around Ephesus. The most beloved is the House of the Virgin Mary. Only 5km from Ephesus, the road continues to reach the house where the Virgin Mary spent her last two years at an altitude of 350m above sea level in the forest. In the area where the house is located, there are a pool with an ancient water storage place belonging to a cistern, fountains where the holy water flows and a restaurant-cafe and a small shop. There is also an open-air church right next to the House of Virgin Mary and there is a ritual here every Sunday and some special days.

There is a famous Temple of Artemis near Ephesus on the way from Ephesus to Kusadasi. The largest temple of the ancient world is dedicated to Artemis, the main goddess of Ephesians. Today, the foundation and a column of the temple can be seen.

Looking forward to the temple of Artemis, you can see the Basilica of Apostle and Evangelist Saint John. Today Basilica of St. John is open to visitors, with great views and an area where excavations continue. It is possible to see the tomb of St. John here. When you walk a little forward from the basilica, the 1400 year old Selcuk Castle (Byzantine) can be seen. This place was opened to visitors in 2014 after being restored.

When you look forward the temple of Artemis, you can also see the 640-year-old Isabey Mosque and the Cave of Seven Sleepers which very close to Ephesus. Ephesus Archeology Museum is located in the center of Selcuk city and the finds in Ephesus are exhibited here. Famous historical Sirince village famous with its wine and old houses is just 8 km away from Ephesus.

The ancient city of Ephesus is one of the largest cities in the world. A guided and private Ephesus tour will be enjoyable especially with an experienced team. In a private Ephesus tour, you can ask your tour guide everything and visit Ephesus in detail. You can see the Amphitheater, Odeon, Agora, Hadrian and Domitian Temples, Trajan and Domitian Fountain, Memius Monument, Scholastica and Varius Baths, Hadrian’s Gate, Celsus Library, Terrace Houses, Curetes, Marble and Harbor Streets.

In private Ephesus Tours from Kusadasi, your tour guide will pick you up from the port or hotel and leave you at the end of the tour. The latest model non-smoking private vehicles are used in our Ephesus tours and there will also be a private driver. So your guide won’t be busy with driving but he will be sitting together with you and you will have the opportunity to chat with him all the way. In a private tour you can customize the itinerary and make some changes as well.

We look forward to arranging memorable Ephesus Tours for you!

Do you need an Ephesus Tour?

Check out our most popular tours.