Ancient Ephesus, located in the Aegean Cost of Turkey, is one of the most attractive, big and old tourist destinations in the world. Ancient Ephesus is visited by a million of tourists every year. It was the capital of Romans in Asia Minor 2000 years ago. After the excavations it became a huge open air museum where the most important Roman works and art can be seen. There are two gates in Ephesus; upper gate and lower gate. There is a gentle slope, so Ephesus tours start at the top gate and finish at the lower gate. Ephesus is in 20 minutes driving distance to a famous touristic seaboard city called Kusadasi and about 1 hour drive to Izmir which is the 3rd biggest city of Turkey. It is possible to travel to Ephesus via highway, sea road and railway. You will find basic information in our Ephesus Map page that we prepared for you before you visit Ephesus on your own or take your Ephesus tour. All the places located in the 3 main streets of Ephesus included in our Ephesus Map. You can have more information by clicking on the short descriptions of each place. For more information please also visit our Ephesus Blog and Ephesus Tours pages

It is one of the three main streets of Ephesus. Harbor Street starts from the theater and end at the harbor. It is 530meters long and there were shops and crosswalks on both sides. This street is also called “Arcadian” and it is about 11 meters wide. It was very close to the harbour and there was 'Four Columned Monument' at the end of the street.

It is the biggest ancient theater in Turkey with a capacity of 24.000 seats. It was built 4th Century BC. It took 60 years to build this huge Theater of Ephesus. It was a Greek Theater which had been converted into a Roman Theatre. There was a three storied stage building, erected in different times and paid by different Roman Emperor.

It is one of the two Agoras located in Ephesus with 11,000sqm of size. There were shops on 4 sides of the Agora. It was built on the Hellenistic period and enlarged on the Roman period. It was the biggest shopping area on that period. St Paul worked as a tent maker in the Commercial Agora with Priscilla and Aquila.

5. Gate of Mazeus and Mithridates

It is one of the main streets of Ephesus. It starts in front of Celsus Library, passes Theatre and reaches to the Temple of Artemis. The Library and the Agora are on the right side of the Marble street. Brothel is on the left side of the street. Further on the right there is the theater and further to its left there is a gymnasium. It also cuts the Port Street.

What it is used for is unknown but according to the common views it was a brothel. It was a large two-story building including a kitchen, a bathroom and a toilet.

These luxurious Terrace houses used by the wealthy Ephesians between 1st Century AC to 7th Century AC. Terrace houses section 2 was covered in 1999 and protected. These magnificent houses, mosaics and frescos can be visited since 2002. 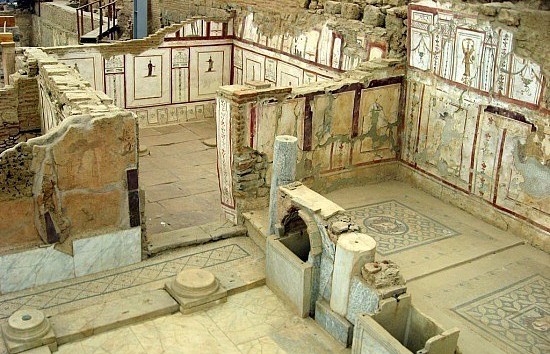 These were the only public toilets in Ephesus and it is said that they were for man. Toilets are very well protected. There should be another public toilet for women in Ephesus which hasn't been found yet.

These were the only public toilets in Ephesus and it is said that they were for man. Toilets are very well protected. There should be another public toilet for women in Ephesus which hasn't been found yet. There were 44 holes on the three sides of Ephesus.

It was a beautiful Roman Bath complex located in the centrum along the Curetes Street, Ephesus. It was restored by a rich Christian woman named Scholastica after the earthquake in the 4th Century. There is a statue of Scholastica in the bath. Every room of the bath can be seen.

This was the area for the pedestrians which belongs to the 5th - 6th centuries. These mosaics are located in front of the Terrace Houses. At the Curetes Street which was one of the main streets of Ephesus, there were paths on the each side.

It is the entrance road to the Scholastica Baths.

It is the only monumental fountain in Ephesus, built for a Roman Emperor. It is located on the Curetes Street and built in the beginning of the 2nd Century. It is 9 and half meters tall with 2 storey. It was dedicated to Trajan the Roman Emperor and Goddess Artemis.

It is the main street connecting upper Ephesus to the lower Ephesus. Its ancient name is Embolos. Herakles Gate, Terrace Houses, Hadrian Temple, Scholastica Baths and Hadrian's Gate are located on Curetes Street.

Hercules Gate is located at the beginning of Curetes street. Heracles' relics are visible on the two columns. It is a gate dividing the upper city of Ephesus. On this gate the frieze of Goddess Nicephorus (Roman Victoria) was situated.

It was dedicated to the famous general Memmius and his dictator grandfather Sulla. Memmius Monument was built in the 1st Century BC. Nowadays new excavations are showing that there were pipes very close to the monument and a side street nearby.

It is the biggest Temple that was built in the city center. It was built for the Roman Emperor Domitian on the 3 floor podium. A huge head and left arm of a Domitian Monument is visible in the Ephesus Museum. The podium of the temple was huge and measured 100 meters by 50 meter.

It is a ruin of an altar located in Domitian Square. There are girlands symbolzing fertality, various fruit and bull head pictures on the altar.

It is a list of the names of Curetes and Vestia Nuns who took a duty in Prytaneon. Curetes and the Vestal Virgins were in charge with the eternal flame, which was symbolizing the existence of the city.

In Roman time fresh water was supplied to Ephesus from 4 different points by the aquaducts. The water was delivered to the city by the clay pipes. Today these original pipes which are 2000 years old can be seen everywhere in Ephesus.

23. The Fountain of Pollio

It is one of the many monumental fountains in Ephesus. It was dedicated to the city by the rich Roman Pollios Sextiliues. This fountain was build and dedicated to Roman Emperor Domitian. It is just opposite the temple of Domitian.

Prytaneon is the place where the holly fire was. The names of the monks and nuns who took a duty here in this place are written on the 2 columns. It was dedicated to the Goddess of Fire Hestia and was the holly center of the city.

It is located on the upper Ephesus and built by Romans. The Odeon is well-preserved with a capacity of 1400 seats. It was used as a concert hall and parliament. This structure is about 2000 years old and was destroyed in the earthquake in the 7th Century AD.

It is the second agora in Ephesus. It is the government Agora. Political subjects were discussed here and it was open to public. Women and the slaves could attend the meetings here.

It was built by the rich Roman Varius for the Ephesians and located on the upper Ephesus. This bath was built in the 1st century AD and was destroyed in the 7th Century AD.